World Music Promotions
Search
World Music Promotions
WMP is a management, booking and consultant agency base out of New York. WMP will help you to navigate the industry and has the ability to open up new opportunities and push your career to new heights. We specialist in artist development and offer advice and mentorship.
WMP is also an e-marketing, grassroots promotional services and event planning company that caters to the International and Caribbean music scene. World Music Promotions’s creative promotion is an outlet where underground talents share their music with the world.
WMP E-Newsletter
“Keep the Music Moving”
World Music Promotions’s free  e-newsletter will keep you updated on the current music, dance, news, events, festivals and new releases pertaining to the underground Caribbean city scene.

WMP E-advertisement
World Music Promotions is a combination of creative design, comprehensive strategy, target market through proper choice of advertising with a pitch of hot pepper to attract an audience with an exotic taste in music and art. 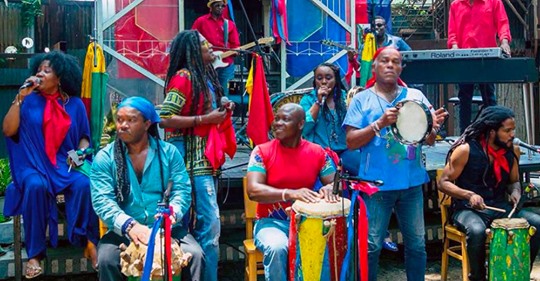 The Score An Insider's Guide to the Performing Arts

Mizik Rasin: An IntroductionCurated by Cynthia Karaha August 16, 2019
MUSIC
On Thursday August 29, international superstars Boukman Eksperyans brings their blend of Haitian rhythms, rock, and reggae to the David Rubenstein Atrium for a free show that will have you on your feet all night long. We invited Cynthia Karaha to help us get ready with this essential Mizik Rasin ("roots music") playlist.

Cynthia Karaha: Rasin is a style of music from Haiti that started in the 1970s and uses elements of traditional Haitian Vodou rhythms under the Rada & Petro rites, folkloric music, and rock and roll. More than music, the Rasin movement began as a way to fight back against the shackle of dictatorial oppression in Haiti, where freedom of expression was forbidden. Boukman Eksperyans is one of the pioneers of the Rasin movement, and many of their lyrics tackle injustice. The style of music was co-opted by the dictatorship to scare and control the population, and for a very long time, Mizik Rasin was censored by the Haitian military, and anyone associated with the genre could be arrested and jailed at any time. The Rasin movement encouraged a generation of activists, and wrested control of the music's narrative from those in power. Over the last two decades, as Mizik Rasin became more popular and less of a threat to political power, there was a brief decrease in new productions. But in the last couple of years, a new surge of young Haitian artists mixing traditional Haitian Vodou rhythms with rap, hip-hop, pop, Afrobeat, and trap are reviving the Rasinmovement.
​http://pae.southarts.org/professional-development/workshops/workshops/world-music-101/
Performing Arts Exchange by South Arts

You’ve been thinking about bringing world music to your community, but you’re a little uncertain about it. This workshop will cover how to introduce world music into a community that has limited experience with it, look at some practical tactics that have helped to develop new audiences, and investigate the dynamics of working with international artists. These world music experts will also identify some of the resources available to help presenters select world music artists that may be outside their area of expertise. 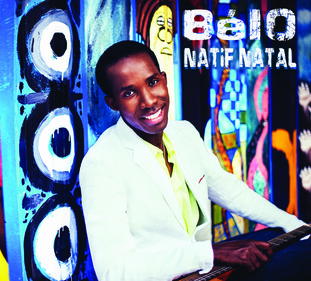 BélO to release new album  “Natif Natal” (Native born)
For Immediate Release April 1, 2014
Haitian International artist BélO will release a new album title “Natif Natal” (Global release date April 9, 2014) with a worldwide tour beginning in the United States. The Radio France International Discoveries winner’s 4th album, “Natif Natal”, is a journey of emotional social struggles, love and the need to belong.
The social crusader is first a lyricist before a music composer, and it comes to no surprise that the first track “Detripay” (Gutted) depicts the world being pulled apart from the inside out revealing prostitution, human trafficking and rape. BélO’s poetic vision and his colorful Kreyol proverbs are put on full display in “Natif Natal”.  A constant social spirit throughout the entire album sending a message of hope (Track 4 Pa Lage), holding on to love (Track 10 Abondans), and despite critical labels of society one should be able to accomplish its mission in life (Track 9 Pa Koute Yo). “Natif Natal” is dedicated to mankind and the dream of a world without boarders (Track 11 Citizen of World). 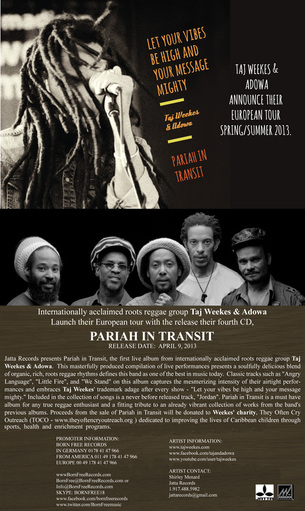 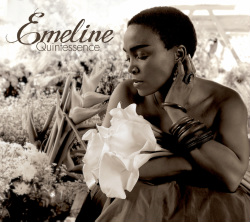 
HARLEM, NEW YORK - Feb. 13, 2013 - Haitian singer Emeline Michel celebrates the release of her latest CD, Quintessence, which has been five years in the making, with a glorious display of Creole soul March 8 and 9 at Harlem Stage. Two Haitian writers of note featured on the new recording will perform alongside Michel: novelist Edwidge Danticat and legendary storyteller Jean-Claude Martineau will read their poetry and recite stories about the power of their nation's spirit, backed by a 12-piece band. Classically-trained Haitian tenor James Germain also shares the spotlight, displaying fresh and unexpected aspects of Haiti's diverse culture.

Ms. Michel - whose indelible presence gained wide exposure during 2010's "Hope for Haiti Now: A Global Benefit for Earthquake Relief" telethon - has cultivated a vibrant career as a Haitian musical ambassador. Dubbed "the Joni Mitchell of Haiti" for her astute musical poetry, she's seen as a source of inspiration by her fellow Haitians at home and abroad, compatriots whose land has been challenged by natural disaster and political turmoil but blessed with a rich culture that has been infused by an indomitable spirit and hope.

Brimming with traditional Haitian rhythms but also featuring her unique and spirited musical creations in the traditions of folk and acoustic jazz, Quintessence is filled with a yearning for, and memories of, Ms. Michel's homeland.

The performances will aim to translate the direct emotion and organic collaboration from the studio to the stage. "I'll be inviting the audience to share in the chemistry, mutual respect and passion for country that the artists share," says Ms. Michel, adding that Harlem Stage is the best place she could think of to launch her new CD. "It's such a nurturing, loving place for artists, and when I'm at the Harlem Stage Gatehouse I embrace it like it's my own home."

Harlem Stage's director of programming Brad Learmonth said, "Emeline is a unique and very special performer. She's been part of our artistic family for several years and we're delighted she's chosen to launch her latest project with us. From our 2010 post-earthquake summer concert Konbit Pou Ayiti (Working Together for Haiti) to the development of Makandal, an opera centered on the life of the legendary Haitian revolutionary that premieres next year, we are committed to using our programs to support Haiti and raise awareness of its rich culture."

Over 30 years Harlem Stage has become one of the nation's leading arts organizations, achieving this distinction through the commissioning and presenting of challenging, relevant and topical performances by artists of color and bringing them to socially conscious audiences in the communities it serves. Harlem Stage has a long-standing tradition of supporting such artists -- around the corner and across the globe -- including legends such as Harry Belafonte, Max Roach, Sekou Sundiata, Abbey Lincoln, Sonia Sanchez, Eddie Palmieri and Tito Puente, as well as contemporary artists like Bill T. Jones, Vijay Iyer, Mike Ladd, Tania León, Carl Hancock Rux, Nora Chipaumire and Jason Moran. Its education programs each year provide 10,000 New York City children with access to a world of diverse cultures through the performing arts. In 2006, Harlem Stage opened ­the landmarked, award-winning Harlem Stage Gatehouse - in an abandoned space that was once the source of fresh water flowing to New York City, and is now a vital source of creativity, ideas and culture. For more information, visitwww.harlemstage.org. 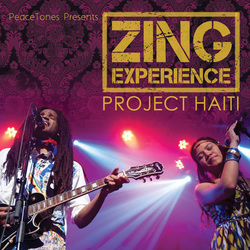 The band’s name combines the word “Zing,” the common parlance for a person with dreads in Haiti, but also meaning a spirit from the sea and vitality, and “Experience,” which like Boukman, is a tribute to one of their major influences, the legendary Jimi Hendrix.

Zing launched their new record with concerts in San Francisco at Bissap Baobab and the BooM BooM RooM. Record release concerts will also be held in New York City at Webster Hall on March 3rd, 2013 and in Boston which is yet to be announced. More information and updates can be found at www.zingexperience.com and at facebook.com/ZingExperience or at www.peacetones.org and facebook.com/PeaceTones. 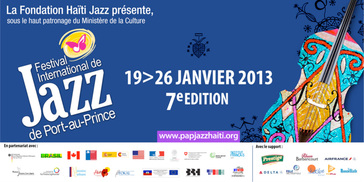 Two jazz stars this year… Indeed, the renowned saxophonist Branford Marsalis from the United States will officially open on the “Prestige stage” at Parc Historique de la Canne à Sucre on January 19th at 6pm, and the incomparable Cameroonian bassist Richard Bona, accompanied by the Mandekan Cubano band, will close this new edition on January 26th.
13 countries... An edition with more international appeal than ever from Germany, Belgium, Brazil, Cameroon, Canada, Chile, Spain, the United States of America, France, Mexico, the Netherlands, Switzerland and of course Haiti will be on stage at the 7th PAPJAZZ.
24 bands ... This year, the PAPJAZZ welcomes 12 international bands/artists, and Haiti will be proudly represented by no less than 12 Haitian bands both local and from the diaspora.
9 days of jazz on 8 different stages: Decentralize the festival from Jacmel to Port-au-Prince to Petion-Ville. The PAPJAZZ will be everywhere.
Always free music workshops… Every morning, many foreign musicians will graciously offer music workshops for young music lovers.
A touristic appeal… La foundation Haiti Jazz, presenter of the event, is proud to offer this recurring “Rendez-vous” of music to jazz lovers from Haiti, the Caribbean and from around the world, as it showcases a cultural and touristic image of the country.

Find all programming in detail at:  www.papjazzhaiti.org.